Spain received 82 million tourists last year, almost twice our population. Which is why you might be surprised that we still register one of the lowest English proficiency rates in Europe. In Spain, less than half of the population understands English, movies and series are dubbed and in smaller cities very few things will be translated. So, whether you’re coming for tourism or for work, if you’re hoping to mingle with the locals (who can blame you?)....  try to have at least a beginner's command of the language.

We don’t want to paint a dire picture. Of course some people speak English. But according to El País only 40% of Spaniards understand some English. Of those not all are comfortable speaking it. According to the English Proficiency Index, English proficiency in Spain is only moderate: we rank 28 out of 80 countries. Which isn’t that bad all, but unexpected in Europe, where we rank only 21 out of 27 countries. 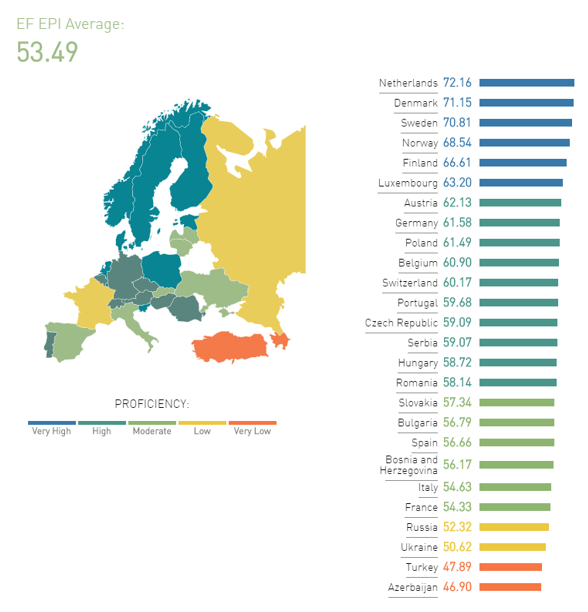 Also, looking at the map, you’ll see similar proficiency rates throughout Portugal. In Spain, the Basque country scores 59.29 points against Extremadura’s 52.79. In total, 5 communities score high and the remainder score low. What can justify these spectacular differences?

As a foreigner in Portugal, you’ll have no trouble going to the cinema. ATMs, metro signs, menus, everything will be translated. In Spain, however, everything is dubbed. Even bands like U2 are named “u” (name of the letter) “dos”. AC/DC become “ah-ceh-deh-ceh” and “wi-fi” instantly becomes “wee-fee”. This, as you might guess, is why English proficiency levels, although increasing, are still far below those of its EU partners. To make this worse, it’s not uncommon to find Spanish speakers when we travel abroad.

So, coming here, knowing at least the alphabet is non-negotiable. If you are coming for work, then having at least a beginner Spanish level (like A2 level) is a great advantage to integrate and settle in faster. You’ll need to know a bit of Spanish for the day to day, be it ordering something at the local bar or requesting information. It will definitely make a difference if you’re looking for a house here, dealing with immigration issues or searching for kindergartens and schools.

Even people coming to Spain to teach English - and that you would expect to be surrounded by English 24/7 recommend that you do so. Ultimately, understanding Spanish is a game-changer when it comes to building meaningful relationships and getting to know the country you’re visiting or moving to.

The good news is that learning Spanish is easier than you think! English speakers don’t take that long to learn basic Spanish. The only thing you need to do is star. Check out our course section to know when the next courses are up!